The Liberation of Mr. Ducky

Yesterday, I left the house to run some errands, swinging first by the dumpster area to dispose of some garbage. I was greeted there by a large stuffed ducky, looking quite woebegone. 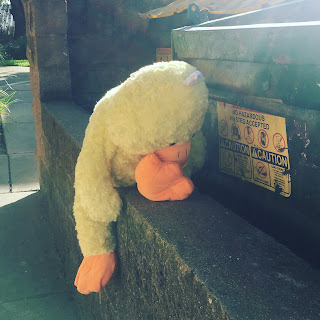 Sometimes people leave items they don't need/want anymore by the dumpsters, in the hopes someone will want them. While I love ducks, I hardly need a very large stuffed ducky and 'tis the season to be wary of all germs everywhere.

But I snapped this picture, because there was something rather moving and poetic about this abandoned duck. I captioned it "Poor little trash duck," uploaded it to Instagram and Facebook, and was off to run some errands.

When I arrived home, I did my usual early-evening routine of showering and putting on a fresh nightie, before relaxing on the sofa with some dinner. I checked in on Facebook and found a few reactions to the trash duck--mostly dismay that he was left behind.

And one, from my friend Dani: "OMG"

When I asked her what she was talking about, she posted a picture of an identical stuffed duck, only this one much more well-loved and covered in years and years of dirt from the child it belonged to--her now 17-year-old son, Jace.

"I've been looking all over for another one!"

Suddenly, I realized a trip to the dumpster in my nightie was probably in my immediate future.

Our mutual friend Shae stepped in, telling me I really ought to save this poor, woebegone trash duck (my words, not hers). Dani demurred, "Oh, it's okay, really..."

I knew what must be done. I threw on my ratty old sneakers and sauntered past my next door neighbor in my Hawaiian-print nightie, down the stairs, to the dumpster. As luck would have it, Mr. Ducky was still there. Someone had adjusted him to look a little less depressed. 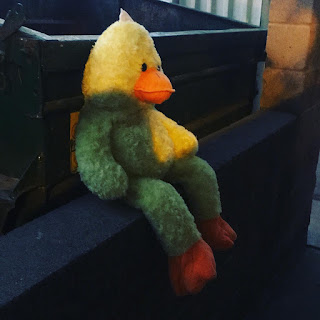 I grabbed him by his little head feathers and schlepped him back upstairs, once again passing my bemused next-door neighbor as she brought her groceries up the stairs.
"This is what I do for my friends," was all I said. 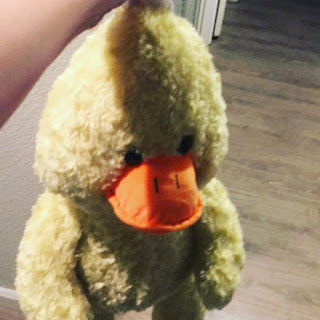 I posted the second two pictures to Instagram, tagging Dani in them and sending them off to Facebook, where she reacted with hearts and admitted to having some tears in her eyes.

What followed, however, is what truly amazed me. While I was feeling a bit sarcastic about "liberating" the "trash duck," it turns out a lot of people I'm friends with on Facebook were reacting to that first picture with the sad reaction button. And once I posted that Mr. Ducky was currently sitting on my washing machine in a plastic bag, waiting to be shipped to his new home in Georgia, these same people started commenting how happy they were to see me rescue him.

Shae remarked that the person who left him there was likely hoping he'd find the perfect home...and it seems he has, or will, as soon as I procure a box and send him Dani's way.

All of this has served to remind me that this year, this wacky, wild, what-the-hell-next year of 2020, has left all of us feeling a bit like Mr. Ducky in that first picture. Alone, and perhaps a bit woebegone. Last week, I got to attend a real, in-person (socially distanced) meeting at school and when asked if I had a Good Thing to share, I half-shouted, "It's just so NICE to be around REAL PEOPLE!!!" The isolation and fear I have lived with since March is a lot...and I know it's a lot for all of us.

So Mr. Ducky gets a second shot at love, and my good deed made a lot of people smile and even shed a few happy tears. Not too shabby for a trash duck.