A few months ago, I was out to dinner with a bunch of high school friends. Of the six ladies there, four were married, one is a single mom, and there was me--never married, no children (and fine with that, thankyouverymuch). The inevitable question came up sometime between our entrees and dessert: "So Megan, are you seeing anyone?"

That evening, I just smiled coyly and told them about a dude I'd been flirting with, mostly via text because we lived in different towns, and hopefully closed the question off for a while.

While I'm very open about many things in my life, my dating life isn't really one of them. My closest friends get the details, and have to put up with the angst (and there is, of course, plenty of that), but you'll notice that unless there's a funny story, I really don't put a lot of it here on the LPB...and even less on Facebook. Partly because I don't want to tell everyone all the cool details about a new guy only to have it...not go anywhere.

But I have been dating. Not quite as much as I'd like, but also more than I mention here. I've had some flirtations, some first dates, and even one non-relationship/friendship/okay, we'll get kissy-kissy but this is NOT serious thing that kept me guessing for several months until he told me, in July, that he is seeing someone. I guess I'm happy for him, even if I'm sad that it means my flirting with him is now at a dead standstill.

The thing about dating is that it can very quickly devolve into me sitting here, staring at OkCupid and wondering why none of the "good" guys want anything to do with me while I get stupid messages from guys with a 46% matching rate to me asking if I'm horny. It's not at all what I signed up for and it gets frustrating...fast. So a week or so ago, after a particularly angsty night of thinking I might as well become a nun, I deleted all dating profiles and decided to go at least a couple of months without any online dating sites in my life--in other words, get out in the real world more, and build myself up by meeting people and making my life happen, instead of sitting around at home hoping Romeo is also signed up for this dating site.

Of course, the last three weeks have been completely focused on my new job because they have to be. I'm happy with that--there's a lot to learn, a lot to accomplish, and I want to do the best possible job. Dating and all of its associated dramas would just get in the way. This doesn't mean I can't flirt and have fun; it just means that my primary focus right now is rebuilding a career I love and really want to thrive. It means that instead of looking to the attention from men to feel good about myself, I'm looking inward, at my accomplishments, my commitment to my job, and the things I've finally learned I'm capable of. It's a good feeling.

I suppose, in a couple of months, I might go back and re-open my profile, see if a renewed attitude, one that isn't fed up with disgusting messages from weirdos who answer "yes" to the match questions, "Do you think men should be the head of the household?" or "Do you think women are obligated to keep their legs shaved?" might bring fresh results. After all, I met the above-mentioned flirtation via OkCupid and while it had a rather pathetic ending, it wasn't all bad. We had some fun and I suppose we still have a decent friendship, in the odd times he texts me wondering how things are in my life.

But for now, it's all about ME. It has to be, and I'm okay with it. Of course I want to eventually find someone to commit to, to settle down with, but I also know that if I'm not enough without that person, I'll never be enough with him.

And that's where I'm at. I suppose I should be feeling rather like Bridget Jones--a sad spinster, but honestly, I simply don't relate to her anymore. There's too much good in my life, too many possibilities peeking out at me, waiting for me to run to them and grab them up. And so I shall...and The Dating Game will still be here when I'm ready to return to it.
Presented to you by... Meg at 6:51 PM No comments:

Labels: The Dating Game, This is My Life

Once upon a time, a thirty-something woman named Meg discovered a small bump on her thumb and wondered what it might be. It didn't hurt, it wasn't bleeding, it was just a wee bump, and she figured it might go away.

A week or so later, there was a small cut on it, which eventually opened and bled (okay, okay, there may have been a bit of help in this from Meg). Meg wrapped it in a Band-Aid and went about her life, wondering what it was but not too concerned, really.

So wart treatment was tried...but nothing. The bump with a cut became more of a blob--not a painful blob, but certainly an ugly one. Meg vowed to keep an eye on it, because she was starting a new job and, anyway, doesn't have health insurance.

The blob, wrapped in one Angry Birds Band-Aid after another, didn't get better--but it also didn't get worse. Still, it was ugly, and occasionally, if Meg wasn't careful, it would burst and bleed like a head wound. Tired of mopping up blood from the bathroom sink, Meg consulted the school nurse, who said, "Well, maybe it's a wart? I've never really seen anything like it..." before giving Meg a fancier bandage and advising that if it wasn't better in a week, maybe go to a "doc-in-a-box" clinic and have it looked at.

A week went by and Meg went through a lot of gauze and sticky wrap bandaging. The blob, now called  Bob, did not get worse...but--you guessed it--he also did not get any better. So finally, as Meg sat in her office on Friday afternoon, cursing quietly as Bob started bleeding all over her desk during a mid-afternoon bandage change, it was decided that a trip to the clinic was in order.

The clinic was one of those dubious places where the nurse couldn't say if Meg's blood pressure was healthy or not ("Even if I knew, I couldn't tell you, I'm not allowed!"). Still, Meg had paid $125 to see a doctor, so see a doctor she would. Finally, he came in the room and asked what was going on. Meg unwrapped her bandaging and proudly thrust Bob the Blob under the doc's nose.

"Oh!" exclaimed the doc. Then he launched into fifteen minutes of repeating the same three basic things:

Meg smiled patiently and eyed Bob the Blob, wishing she could run like hell...and get her money back. Finally, the doc left the room, and mentioned coming back with a dermatologist referral. "I'll wrap your thumb for you when I return..." he promised vaguely, leaving Meg to wait several minutes and play with her iPhone, taking an Instagram picture of Bob for posterity.

Finally, the doc returned and told Meg to go back to the front for her referral, then wandered off without wrapping Bob the Blob in a protective layer of gauze as promised. Fortunately, Meg has been carrying a Zip-Loc baggie of gauze, wrappy stuff, and Neosporin in her purse for a week, so she got the job done in the waiting room.

Finally, the referral (with Bob's location listed as "right thumb" when he is, in fact, on Meg's left thumb) was given, and Meg hot-footed it to her car, lighter in her bank account and rolling her eyes at this strange place. Fortunately, Bob the Blob, while ugly and slightly inconvenient (try, sometime, playing a piano for a choir class with a thumb wrapped in gauze and wrappy stuff) is not dangerous, just gross. What Meg walked away with is the doctor's assertion that Bob is merely the result of a healthy immune system overreacting to an irritant in the skin, "which the dermatologist can help you with." Excellent.

So, from here, Meg lives with Bob the Blob a little longer, until she can figure out how to pay to see a dermatologist (she might bite the bullet and just get some affordable health insurance because she's going to have to soon, anyway). She will keep him clean, keep him wrapped up, and hopefully soon have him fully removed so her thumb can get back to normal. 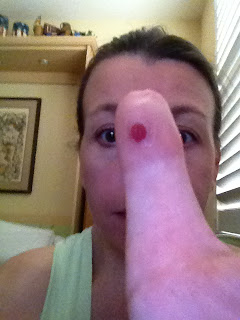 What a crazy, hectic week! I had a bunch of seriously long days (like 12+ hours), but a lot of satisfaction.


Saturday: No pics. I spent a great deal of time cleaning, then Mom and I went shopping. Now my back hurts (it has been, on and off, boo) and I'm sitting here drinking tea. Because I've earned some sit-and-drink-tea time this week!
Presented to you by... Meg at 3:17 PM No comments:

Wednesday morning. I'm in the middle of a very hectic week of subbing, meetings, 12-hour days and other assorted madness. I'm in good spirits, but I also really need a nap.

Monday was Back To School Night, which went very well. From there, I drove to Sac State for the start of my third season with Sac Choral. It was great to be back, even though I was sitting there thinking, "Oh, God. I'm so tired!!"

I did an all-day sub job for an English teacher yesterday. Her prep period is the period I teach choir, so it amounted to a full day of teaching with no break. When you tack on the hours I spent teaching private lessons later, it gets exhausting.

The good news is, I'm handling it well, keeping my head up, and looking forward to the paycheck I will get with the sub money.

Besides, weekends are for relaxing...and I've got a three-day weekend coming. : )
Presented to you by... Meg at 7:44 AM No comments:

It was another good week. Happily exhausted. 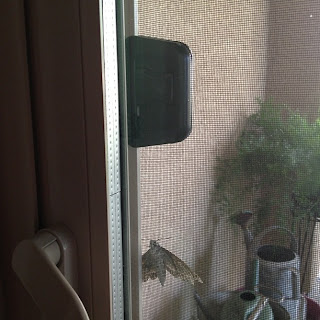 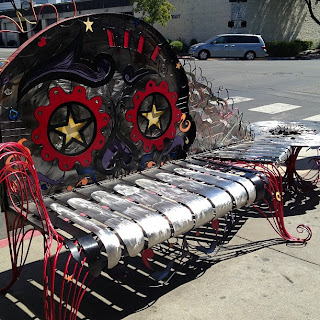 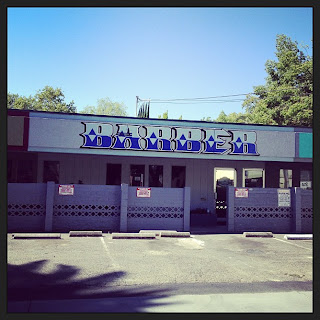 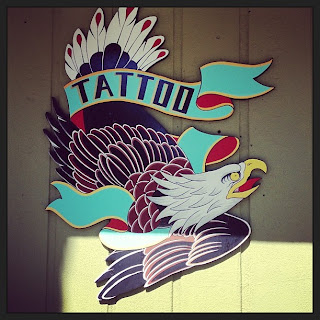 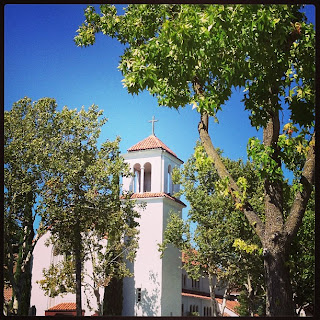 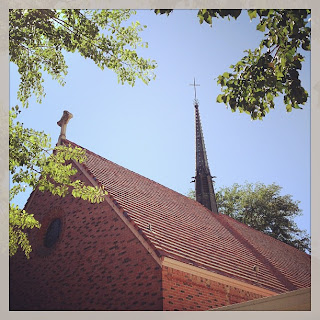 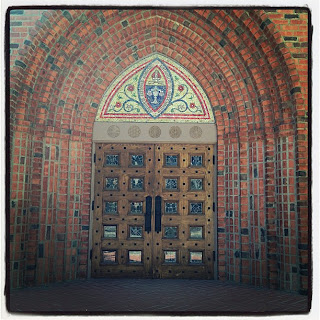