If there was ever any doubt that Popcorn and Archie would completely steal my heart (there wasn't)...they have.

We're just past the three-month mark, and I love the boys so much, it's ridiculous. Every day they make me laugh, and every day, I'm thankful to have them.

Popcorn is my lap cat, my cuddlebug. He loves to jump up on the couch and knead his paws on my lap before making a quick circle and plopping down for a long nap. He doesn't offend easily, so if I sneeze or get a bit wiggly, he just rolls with it. If I scratch his ears or his back, a very faint little rumble will start, even as he dozes.

Archie isn't as much of a lap cat, but he definitely demands his share of attention, and, with his brother, he sleeps next to me on the bed at night. He's more likely to be ripping a catnip mouse to shreds on the floor while Popcorn and I watch from the comfort of the couch.

Seriously, The Boyz are pretty special. 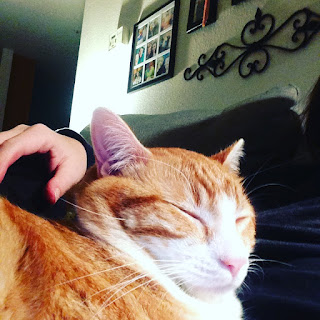 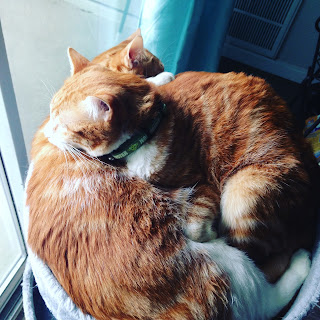 After several months of using a tiny TV on a night stand, with cords hanging out all over, I finally found a TV stand.

See, my tax return was big enough that I was able to pay off both my credit card and my sofa (with enough left over for a plane ticket to visit Summer in Phoenix for Spring Break, yay!!). I still have approved credit at RC Willey, and the delivery fee I paid for the sofa is good for a whole year. I found a reasonably-priced TV stand that I liked the look of, so I bought it. Mom and Dad are getting a new TV soon, so I get their not-so-old one, which is three times the size of what I currently have.

In the meantime, I've done some picture-hanging and whatnot in preparation. 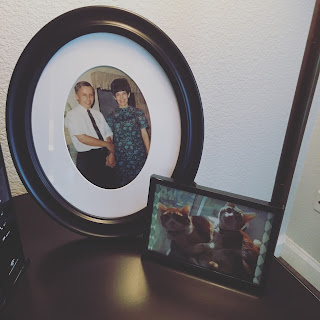 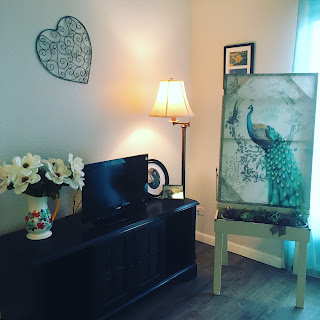 I also recently bought some frames for some priceless artwork, to hang above my dresser. I was teaching my students about Cubism and loved how my samples turned out. 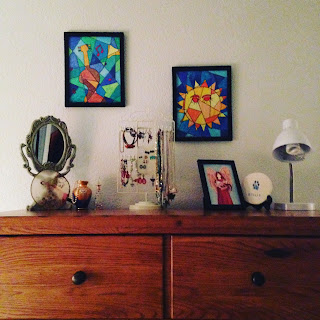 I also bought a plant stand that is doubling as a tiny table next to the couch, because I needed more light there. The London phone booth picture had been displaced from over the fireplace, so I put it there with the tiny London bus I've been hauling around from one home to another since 1999. After the Beat the Blerch Half Marathon in November 2015, I took a break from longer running for a while. As 2016 dawned, I wanted to spend less time pounding the pavement and do shorter races. In April, I ran a 12K, and it was okay--I under-trained for it, but I made it through. By July, I was in escrow on Casa Meg, and two days after taking possession of that hot little mess, I "ran" a favorite local 5K in Sacramento. Okay, I walked it. After the first mile, in which I felt sick to my stomach, I slowed it down and enjoyed the scenery.

Then I got busy making Casa Meg what it is now, and moving, and decorating, and fixing, and adopting cats, and...you get it. I haven't been running. I make the gym a priority, but I just haven't made time to run.

I miss it. I miss the Zen feeling that comes when I focus on my breathing (two steps for each inhale, two steps for each exhale). I miss the feeling of meditating I achieve when in motion like that--I can't get it sitting still. I miss how my body feels after a long slog. So, I'm getting back to it.

On Monday, I went out with one mile in mind. A long day at school followed by an after-school band rehearsal had me wanting to get it over with. My shins protested every run interval. During the walk intervals, I heaved. My face was soaked with sweat. I reminded myself that it's worth this initial fight.

On Wednesday, I did again. The difference wasn't huge, but it was there. It was the tiniest bit easier, but still nowhere near as easy as it used to be.

I went out again this morning, with two miles in mind. I'm not going to lie--I walked most of it. I spent a good chunk of yesterday cleaning and doing laundry, and had a late evening hanging out at Sarah's. Running was the last thing my body wanted to do, but I got out there and ran part of two miles total. Just making myself lace up the Mizunos was a big deal, really.

And so it goes. I'm thinking of signing up for the Urban Cow Half Marathon in October to give myself a goal...and another finisher's cowbell. That is plenty of time to get back up to thirteen miles, especially given my running history. There are parks near my condo that give some nice running routes, and I'm not opposed to going to Mom and Dad's on a Sunday morning to run their neighborhood again. After all, I ran there for five years and trained for three half marathons on the hilly terrain there.

So bring on the $125 Mizunos and endless packs of Gu gel. Bring on the stretching and foam rolling and the pissing and moaning. But mostly, bring on the badass feeling of getting it done out there. The Running Fool is back.
Presented to you by... Meg at 1:22 PM No comments: