I remember arriving in London in Spring 1999, getting to know my new flatmates and asking the inevitable question: "Where are you going for Spring Break?"

Many of my cohorts were straight off to Amsterdam (for the pot), but I had a lifelong dream of seeing Scotland (for the ancestral ties). So while they took the Chunnel to the Continent, I took Brit Rail to the highlands.

Now, it's my turn...all these years later, I'm off to Amsterdam. I leave on Saturday (overnight flight), and I'm so excited, I can hardly stand it. I have no interest in the pot culture (to each their own and it's just not something that excites me), but I have every interest in the canals, the museums (Rembrandt, and Masters, and van Gogh, oh my!), and the Anne Frank House. I want to take the quick trip to Zanse Schaans, a traditional Dutch village with windmills, a wooden shoe maker, a cheese factory, and a coopery--yes, a cooper!

I will take the 15-minute train ride to Haarlem to see a church organ where both Handel and Mozart performed.

And on Friday, I will take the train to Delft, and spend a day with a dear duck lady, Amanda. We're meeting before that, too, for dinner on Wednesday, as she will be in Amsterdam that day for work. After dinner with her, I will be going to a Wynton Marsalis concert at Amsterdam's grand old concert hall.

Did I mention that I'm excited?

A big group of us from school had planned to go bowling tonight. Karen had found a great Groupon deal for bowling and laser tag, so we set up plans. Now, no one feels like light-hearted partying.

On Tuesday morning, an announcement came over the school's PA system, about twenty minutes before school was to start. Our boss was asking all staff to report to the office. This has never happened before--usually any last-minute information is conveyed over email. Most things can wait...so we knew this had to be important.

We were told that our colleague--and friend--Jami had died in the night.

Jami was thirty-four years old. She had been teaching with us for three years, she was mother to two girls (ages 12 and 8), and married to her high school sweetheart. She was funny as hell, quick to share the absurd little day-to-day stories in her life and make us all laugh. She was a frequent participant in social outings among staff.

Reactions in the staff room ranged from shocked silence to instant sobbing. People grabbed on to the people next to them, voices called out to no one in particular.

"But she was here yesterday!"

What I love most about this school is that we are a team. We hold each other up, and that is just what we did on Tuesday. The kids didn't know yet--it was decided by the district that we would inform them on Wednesday, after the family had time to notify extended family. So we put on our game faces and taught as normally as possible. It was gruesome, and exhausting.

We knew that on Wednesday, we would have to tell the kids. Jami was a middle school teacher, and many of them had known her for three years. A counseling team was sent out from our school district. A district administrator was on hand to help us. We paired up so that no one was alone when telling the kids. We were given a script to read if we needed it.

I had eighth grade first period--the group that had known Jami longest. They game in as they usually do--laughing, talking, joking. I heard some things said that made me think that they had heard the rumors that were already flying around.

They had heard, but they didn't believe. They thought it was a joke of some kind.

"You guys, it's true," I told them. "Mrs. V. died the other night." My eyes filled with tears. "It was sudden. We are all shocked. She wasn't just a fellow teacher to me, she was my friend."

From there, I had to read the script. My own words were jumbled in my head. So I read to them that it's okay to feel sad, angry, confused. It's okay to cry.

The last few days have been an emotional roller coaster. We are all sad, and confused. Many of us are angry--Jami had some ongoing medical mysteries that were largely ignored by her doctors. But we are thankful, too. Thankful to have known her, thankful for our team, as we hold each other up and keep marching forward.

Yesterday, in particular, was so incredibly difficult. Telling students that a beloved teacher has died is not something I ever want to do again. Knowing what to say was so hard. For some kids, just a hand on the shoulder and a simple, "I know..." was enough.

Today, during my prep, I saw our English Language Development teacher working one-on-one with a student who is new to the United States. His English is very limited, but no one works harder than this young man. They had an assignment from my class in front of them, and they both had some questions. I sat down with them and helped, with translation from Oleg. As I watched my young student diligently writing and absorbing, I almost teared up. These kids are awesome. They overcome obstacles and grief. They come to school and give so much back to us. Yes, sometimes they make me want to scream, sometimes their attitude needs adjusting, but every day, I love my students. There's a reason I do this.

Labels: Tales From the School Yard

Fifty years ago today, my parents got married. They had only known each other for six months at this point, but they already knew they were best friends. 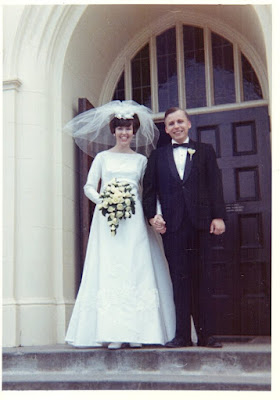 It's been fifty years of living, and with all tht living, of course there have been ups and downs. But through it all, they've remained best friends, and a team. Nothing about that changed with Mom's cancer diagnosis last summer--they just keep meeting the challenges together. Watching Dad help Mom through this has been a lesson to me on just why I am so particular about who I date. They are a partnership, and they don't run from the challenges.

Happy Anniversary, Mom and Dad!
Presented to you by... Meg at 6:00 AM No comments: