Ramblings of a Grateful Daughter

I will start with the most important part...

Mom had her surgery last night. Dad and I saw her as far as the pre-op prep area, and we got to meet the anesthesiologist, two RNs, and the surgeon. Everyone was calm, matter-of-fact, and really awesome. One of the RNs was asking Mom a question while looking at his computer screen and I said, "Just FYI, Mom is hard of hearing."

"Oh! Thank you!" he replied. "Then I'll just move to make it easier!" He sat down on a chair right next to Mom's head and spoke clearly so she could get everything. She didn't have her hearing aids in by that time.

She was calm, but Dad and I were a coordinating pair of hot messes. Dad was twitchy and quiet. I was twitchy and--ugh--teary. I tried not to let tears come, but they couldn't be stopped. In between visits from the doctors and the RNs, I let them go, feeling foolish. That's anxiety for you. Mine manifests itself in tears.

The last person we met was Dr. P., the surgeon. When he was assigned as Mom's surgeon, she was told by her GI doctor, "I've worked with him many times. He's excellent." Later, her oncologist said the same thing. A friend of mine from work knows him because he operated on her mother, and she told me he's amazing. By the time I found myself shaking his hand, I was about six seconds away from bursting into fresh tears, throwing my arms around his neck, and yelling, "THIS IS MY MOMMY!! TAKE CARE OF HER!!!" I managed to contain myself.

Mom insisted that Dad and I not wait at the hospital. The surgery was to start at about 5:30, and would take about three hours. "You'll be more comfortable at home, and I don't want you driving later tonight." We respected those wishes and set off to our respective homes. I stopped to buy cat food (I needed a bag, and so did Mom for her cat, so I bought both), and then at OSH for some plants. I spent the next three hours not relaxing. When the phone rang at 8:30, I was scrubbing my shower.

The surgery went very well. The doctor was very positive about Mom's prognosis. The tumor was the size of a grapefruit (!!!). Mom would spend the night in the ICU for close monitoring and attention to her every need.

When I stopped at PetCo for cat food, I got the brilliant idea to run into the OSH next door to get some more petunias to plant. I had a couple of plants not survive being in pots in the harsh heat we've been having, but my petunias are thriving--apparently they love pots, love heat, and just need a good daily watering to be happy. I also bought a jasmine plant that smells heavenly.

I wandered up and down the aisles for a few minutes, stopping to admire the flowers and breathe in the smells.

It was nice to step outside and dig my hands in the dirt for a bit. I gave the new plants some water and breathed in the smell of soil and leaves (and jasmine!). When I finished, I plugged in the new outdoor lights I bought and sat for a few minutes--not really relaxing, but at least being still.

It may not be a huge garden, but it's beautiful, and it's mine.

(P.S. I had seen this a while back but found it again--turns out that digging in the soil can have anti-depressant effects.)

When I was a tiny girl, my Grandma Bean used to play a game with me, pretending that my Snoopy doll could talk to her. He'd whisper in her ear and she'd talk back to him, making him nod or shake his head to answer her questions. I ate it up, and Snoopy always went to Grandma and Grandpa's house.

Grandma died when I was 15, and I remember sitting in my bedroom, hugging that old doll and crying. I've never been able to pack him away, or leave him behind. He went to England with me. He's too dear, too precious, to go in a box and be forgotten.

So on Wednesday, when I knew Dad was taking a few things to the hospital for Mom, I had a thought of my own as I got ready to go. I grabbed a picture of her cat, Bella, and I grabbed Snoopy from the trunk at the foot of my bed.

"He has a lot of magic in him, you know," I told her as I handed him over. She laughed and hugged him, and we reminisced about Grandma. I left Snoopy with her that night, and took him home yesterday. He'll go back when she's put in a room tomorrow, and stay out her hospital time with her. When she goes home, he'll come back to his spot at the foot of my bed. 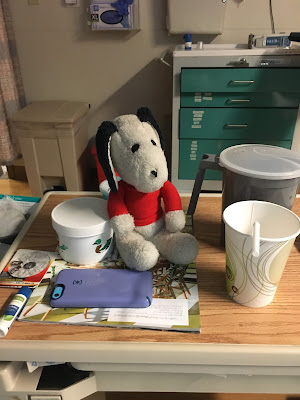 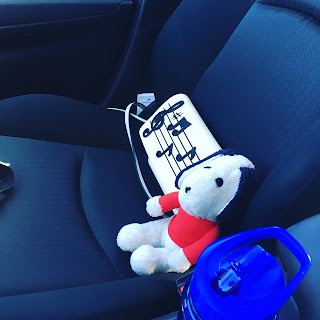 In the middle of all of the anxiety and uncertainty of having my mom in the hospital, incubating an internally-bleeding grapefruit-sized tumor, I still managed to think about the adventure I want to have for my 40th birthday in 2018.

So for my February break, I will be spending six nights in Amsterdam, The Netherlands. Round-trip airfare, hotel, and travel insurance added up to a very reasonable $960 on Expedia. I've never been to The Netherlands and understand that it's very easy and very quick to get anywhere by rail--like Harleem, Delft, and other cities for a couple of day trips.

And in Amsterdam itself is the Anne Frank House (a must-see), the van Gogh museum, the canal system, and many other museums.

When I told Mom a few days ago I was thinking about a trip she smiled and said, "You're going back?"

Oh, London is always tempting. But there's so many places I haven't been yet! Including The Netherlands.

This morning, I was going to get some stuff done here at home and then go see Mom in the afternoon. But Dad texted me at about 9:30 that Mom was awake, smiling, and in good spirits (even with a respirator in), so I had a quick shower, made a smoothie to go, and dashed off to the hospital to see her.

She was still in the ICU, so I had to call on a little phone to get in, and when I walked inside, a cluster of doctors and RNs were talking. I had no idea where I was going and they could see my confusion.

"She's right here!" Turns out, they were the pulmonary team that was going to suction a bit of fluid out of one of her lungs (common side effect of anesthesia) and remove the respirator. But as they weren't quite ready yet, I was able to go in with Mom, who had Dad next to her.

Her face lit up when she saw me, and she smiled around the respirator. I almost burst into tears (the happy kind), and just walked over and grabbed her hand. She had a good, strong grip, and we communicated the best we could with me having use of my voice and her just her hands and small head movements. 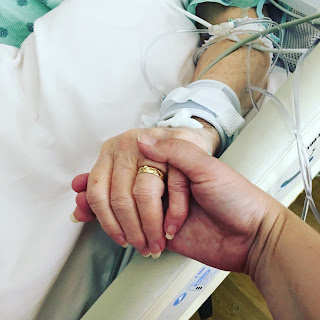 I took this picture because I was just so happy to be holding my mom's hand. For all that I'm almost 39 years old and a homeowner, a full-time teacher who is left in charge of classrooms full of kids on a regular basis...inside there's still a tiny girl who looks at this woman and thinks, "Mommy." When the diagnosis came down a few weeks ago, the gut-punch almost brought me to my knees.

I'm not a big believer in a higher power, but I do sort of think the universe works in certain ways. And I told it, "Look, you're going to have her eventually...but not just yet, okay?"

If my mom has to be in the hospital having major surgery, then I'm going to selfishly say that I'm so glad it happened on my summer break.

I had volunteered to teach summer school, but numbers weren't high and I wasn't needed. Now I'm glad. The extra money would have been nice but the freedom to be at Mom and Dad's house, or at the hospital, whenever, is very welcome.

After seeing Mom off with her anesthesiologist yesterday, Dad and I got a quick bite to eat at the hospital cafeteria. As we waited for the elevator, Dad said, "I'm glad you don't have to be at school right now."

"Oh my God, Dad, I am too. There's no way I could teach during all this. I'm a wreck!" I have a very understanding boss, and plenty of sick days I could use, but I'm so glad that I don't have to worry about sub plans and how my kids would act, and catching up on grading. My sleep has been erratic the last few nights and my anxiety super-high.

Starting with my blog and continuing on Facebook, I've become, I suppose, the unofficial spokesperson for the Cooper family. When I realized how many of Mom's friends were commenting on information I had shared last week, I decided to give updates from time to time, and I've had a lot of people thank me for it. Meanwhile, I have received so many lovely expressions from family friends and my own friends towards Mom and even me, which has helped all of us immensely.

Before Mom went into surgery, I read her some of the messages people wrote on my "today's the day" update. She was so touched, and it made her smile. This morning, I read the comments people had left on my post letting them know the surgery was finished, and successful. She couldn't talk, but her smile said it all. She definitely feels all of the love pouring her way from all corners.

Tomorrow, when she's in a regular, non-ICU room, she'll have her phone again and be able to access Facebook when she feels up to it. I know she will read every single message and comment, and I know it only contributes to her healing.

Meg, being able to keep up with your moms healing, without being a bother is wonderful.
Jon

I'm so happy for your mom, dad, you and the rest of your family that the surgery went well. I'll keep her in my thoughts and prayers!!